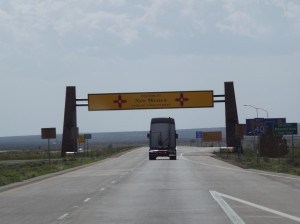 Friday we headed thru North Texas and into New Mexico. We stopped for lunch at a real nice rest-stop in north Texas. It was neat to see the big windmills and the desert.

The views were beautiful in New Mexico. Just as we crossed into New Mexico on I-40 we stopped at one of the first truck stops. It had an antique car museum that was so cool. If you get a chance to pass this way its definitely worth the stop and its free.

It was late when we finally stopped in Grants, New Mexico  for gas and hotel, but when we went to pay our cards wouldn’t work. It was late and we were not sure what was going on, but thankfully we had enough cash to pay for everything. We had put all our accounts on alert that we were on vacation so this wouldn’t happen. I was so extremely upset because I really didn’t know if we were going to be able to get ahold of anyone in the morning.

These windmills were huge up close!

Stormy & sugar having fun in the back seat

Yea this was Amarillo! 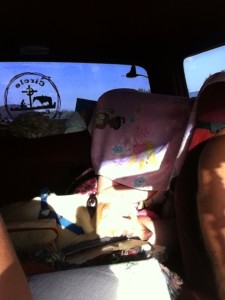 We had planned our next vacation for later this summer in August to go up to Oregon and visit with Harold’s family after we had gotten some other obligations taken care of. But we received word that Harold’s dad wasn’t doing to well after being diagnosed with an aggressive stomach cancer. So we decided we needed to make a trip to Oregon as soon as possible.

We decided the best thing to do was to take our own truck and head out as soon as possible. so we took our truck in to the shop and get the new water pump installed, then Thursday morning we finished getting the oil changed and everything checked and loaded up. After running a few last minute errands we finally got headed out about 6pm.

We got as far as Wichita Falls, TX Thursday evening before shutting down for the night.